Chocolate is one of the most demanded flavor in many desserts and ofcourse in chocolate bars. It’s used widely in cakes, shakes, sweets and other desserts too. It has a great power to alter mood and to reduce the effects of depression. It is also a great gift on any number of occasions. That’s why the gifts of chocolate hampers are very popular.

Despite its popularity, most people do not know the unique origins of this popular treat. There are a large number of processes involved in the overall process of chocolate making from harvesting to the end chocolate bar form. It is very interesting information to read about the processes of your favorite eatable.

Cocoa tress are cultivated in tropical ever greet forests. Mainly the cocoa is cultivated in with Theobroma Cocoawhich grow in the wet lowland tropics of Central and South America, West Africa and Southeast Asia. The harvesting process is manual. It collected from trees, placed in piles and the shipped for production. 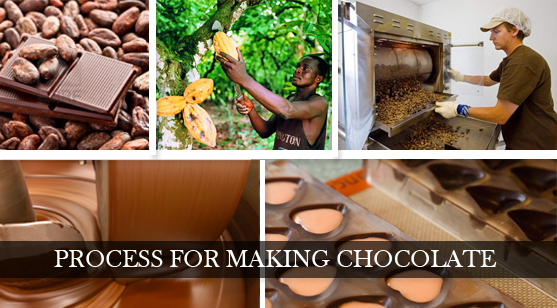 Cocoa is removed from of pods. N machine can be used in the process as it can damage the pods. After collection of pods, the cocoa seed are taken out of them, initially they are yellow in color. Then through fermenting process i.e. sun drying, the seeds are dried and it takes 6-8 days. After the seeds are dried they become brown in color. And its weight reduces to half. Then it is shipped to manufactures.

In the manufacturing company the first step is to roast the cocoa beans in large pots and then cut them in small pieces called cocoa nibs. The roasting process makes the shells of the cocoa brittle, and cocoa nibs pass through a series of sieves, which strain and sort the nibs according to size in a process called “winnowing”.

The process of grinding results in a cocoa liquor which is made by grinding of nibs. The cocoa liquor is unsweetened chocolate. The grinding process generates heat and the dry granular consistency of the cocoa nib is then turned into a liquid as the high amount of fat contained in the nib melts. The cocoa liquor is mixed with cocoa butter and sugar. In the case of milk chocolate, fresh, sweetened condensed or roller-dry low-heat powdered whole milk is added, depending on the individual manufacturer’s formula and manufacturing methods.

Now the cocoa liquor is molded according to the company recipe by adding milk, sugar, cream, butter and other ingredients to it. By varying the ratio of these ingredients the manufactures make different types of chocolates like milk chocolate, dark chocolate,white chocolate.
After blending is complete, molding is the final procedure for chocolate processing. This step allows cocoa liquor to cool and harden into different shapes depending on the mold. Finally the chocolate is packaged and distributed around the world.