Weddings are very special and people are very conscious for each and every detail of their wedding including the venue, catering, decoration, dress, guest list and also wedding hampers. Many people are courteous to be thankful for all the wedding gifts they receive from the invitees however sometimes certain people are not very welcoming to a gift that is not according to their choice. This seems quite rude on the part of recipient since a gift is not something that one should expect to be of perfect choice. Nobody knows if you are fond of jewelry or you can be delighted with a simple flower bouquet on your gorgeous day. The recipient is solely gifting you with pure feelings and best wishes for your future life. One must not create a fuss out of it if the wedding gift is not according to your expectations.

One such incident was mentioned in Huffington Post UK where a couple received a simple and probably inexpensive gift box containing some foodies like chocolates, biscuits, sweets, and other specialty foods; from their couple friends. They were quite upset about the gift and termed it to be cheap and embarrassing gift since it had nothing worth sharing with their family. They clashed with the guest couple and harshly condemned them for their unattractive and useless gift. The recipient even told them that it was a mistake to spend money on them by inviting them to the wedding and couldn’t reimburse his amount in the form of a delicate and expensive gift. This was a really rude behavior and it definitely would have hurt the sentiments of the guest couple.

Anna Post, an Etiquette Expert says that it is up to the guest that what type of gift they want to give to the couple. It totally depends on their budget and the relationship that they maintain with the wedded couple. They should not be judged on the price of the gift because there is no minimum or maximum amount for a gift.

Weddings are celebrated with our family and friends in a lavish style because we all want our closed ones to be with us in our moments of happiness. When we are inviting them for their love, support and wishful prayers, then we should not become materialistic when it comes to gifts. One should not be judgmental about someone on the basis of wedding gift because you cannot measure the feelings and emotions with mere worldlythings. Relationships should not be tied by these material things and one should give respect to the choices of their loved ones. Even if you don’t like the gift you should gracefully accept it and do not let them know about your feelings about the gift.

On the other hand, the invitees should also be a little careful when selecting a wedding gift for the couple. They should know the nature of relationship with their recipient and make sure that they choose the best gift that is somewhat close to the choice of the recipient. If they have a very formal relationship, they should get something exceptional or get help from various sources. Like in UK there are hundreds of online retailers offering exquisite variety of wedding hampers UK that are specifically arranged by expert designers. These are a safe spending on a wedding hamper if you are not aware of the desires or requirements of the recipient. They are properly arranged with quality products, and presented in chic designed boxes or baskets that make a long lasting impression on the recipient and guests as well.

So next time you want to send a wedding gift, do a little research on the couple’s requirements and the options available to avoid any hardships between you and the recipient.

Giving gifts is an age old tradition and is said to increase the bond between the sender and the recipient. This is because the sender of the gift does take a good amount of time, effort, and patience to select a gift according to the preference of the recipient, which makes it all the more essential and important. Every person would like to gift his girlfriend with something unique or innovative so as to impress her and make her feel special. The gift is also a wonderful way to express how much he loves and cares for her. It is also a way to show that every moment is spent on thinking about her and their union.

Sending hampers for her in UK

Before selecting a gift for the girlfriend, there are several things that the individual has to understand in order to make the perfect choice so that it can be well received and appreciated. It is actually surprisingly much easier when the individual takes out some time to ponder about the lady, who is to receive the gift. Precisely, what is the relationship with the girlfriend – close, intimate, or casual? No individual would like to make a mistake of presenting something that would be taken as an intimacy signal, especially with someone that the person intends to be casual with. Also, the reverse is true. 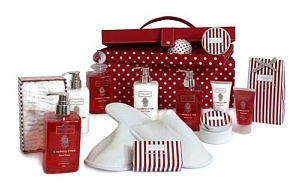 It is very important to focus on what her likings are and not as to what the individual wants her to prefer, what the mother likes or what the person personally likes. Some people make the mistake of offering the girlfriend with something that will not be appreciated by her and sure to be rejected or have her feelings to be hurt.

What message is to be given?

This is referred here about a subliminal message. Items that are purchased as a gift for the girlfriend would simply come back if something that appears useless, cheap, or is highly expensive or something which states that it was grabbed since nothing else could be found. With lots of gifts around for her, selecting a good one can be confusing. If the individual does not have experience or expertise, he can ask for help from someone known to him to choose something great, which would help him to impress her in every possible manner. Gift hampers can be a wonderful solution for all occasions and reasons.

Themed gift baskets do come in different sizes and shapes, and also come with attractive packages. It is to be understood that the first impression is definitely much important for presenting any gift to her. Items present in the gift basket are considered to be cute little packages, with each of them carefully examined and packed. When unwrapped, it is sure to prolong the joy of receiving such gifts.

Most of the items present in gift hampers are also consumables, which means once the gift items are completely used up, the girlfriend can happily receive another basket.

The bridesmaid would stand beside the bride on this special day, support, and love her during the wedding planning journey. Also, they have been accommodating some of the crazy requests made since they are aware that it is the wedding, and the bride deserves everything that her little heart desires. For showing some appreciation to them, it is important for the bride to present them with something interesting that they would remember for a long time. This can be done by selecting a wonderful bridesmaid gift. With some tips, it is possible to purchase something for the best girls to show that they are cared for. 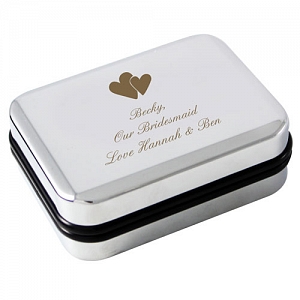 Buying them at any point of time

It is not necessary that the bridesmaids’ gifts should be purchased at the last moment when there are chances of it being forgotten. It would be better to purchase these gifts much ahead of time, to save the embarrassment, and to show the much needed affection and love. By purchasing before time, the individual can also save some money by shopping smartly, and availing the best deals, and discounts.

Considering it as a trade

An important thing that needs to be considered while shopping for gifts for the bridal part is by understanding the type of present would suit the bridesmaid, and help them to be satisfied and happy. In case, they are assisted financially, then, the gift could be a bit smaller. However, if the bridesmaids are being asked to spend on shoes and dress, then, it would be better to pay their hotel room and air tickets. By spending a bit more amount would show, how much they are being appreciated.

The Maid of Honour being the MVP

Some amount can be spent on the maid of honour. It can be traded for what little extra things that she would do for the person. Usually, it is her responsibility for organizing bachelorette party, and to coordinate bridal shower. By presenting her with a lavish or unique gift, the person can show the appreciation to her efforts.

Traditionally, the bridesmaid gifts are generally handed out during the rehearsal dinner, especially after the bride toasts the maid, and then, praises them for their efforts and hard work, which they contributed towards the wedding. In case, the individual is not able to make out time publicly, then, she needs to ensure that a suitable private time is given to the bridesmaid for presenting the gifts, to avoid being rushed.

Deciding on the type of gifts to be presented to the bridesmaid could be a difficult task. It could be an individual gift or a uniform one. The uniform gift can be shoes or jewellery that can be worn at the wedding. It also could be matching robes. Irrespective of the purchase made, it should have sufficient function after the wedding.

Giving gifts like the bridesmaid gifts, birthday gifts, or anniversary gifts has been a tradition since long and is increasing in popularity over a period of time.